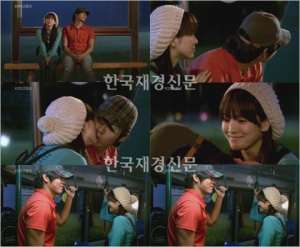 Yesterday marks the debut of MBC’s “The World They Live In“, a highly anticipated drama on television drama production casting Song Hye Kyo and Hyun Bin. And in this premiere episode, there was already a kiss scene between the two leads that left viewers thrilled, creating a buzz on the internet after the broadcast.

Jung Ji Oh (Hyun Bin) and Joo Joon Young (Song Hye Kyo) are both directors of a television station, with Ji Oh a senior while Joon Young is the newcomer but with a desire to achieve perfection in filming. They were previously lovers for 6 months but broke up in the end. A flashback scene was shown in the midst of argument between Song Hye Kyo and Hyun Bin. The flashback shows Song Hye Kyo and Hyun Bin sitting side-by-side at a busstop waiting for the bus to arrive. Hyun Bin turns around after Song Hye Kyo gave a tap on his shoulder. However little did he expect that Song Hye Kyo then inches forward to give him a peck on his lips.

After the broadcast, netizens flooded the official forum and left comments like “Song Hye Kyo is too charming, especially after she did that ’sneak attack’ to Hyun Bin”, “The shocked expression on Hyun Bin after the kiss is extremely cute”, “They are very compatible”, etc.

I have watched the first episode yesterday as well. Its a nice, lighthearted drama as opposed to other two supposedly dark themed “East of Eden” and “Tazza“, but it wasn’t quite what I had expected though. I find the first episode relatively uninteresting except for the interactions between Song Hye Kyo and Hyun Bin. Though they tried to show the intensity of a drama production but I just couldn’t feel it. This is just the first episode though, I pretty sure it will get better and am awaiting the chemistry between the two leads. At this point of time, it is 3 more hours to the broadcast of the second episode!